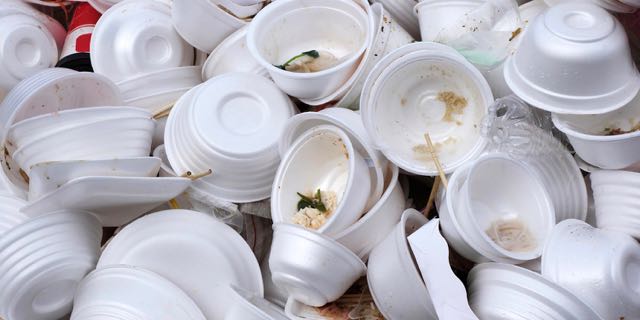 Why Styrofoam Is So Bad for the Environment

Everyone knows that Styrofoam is bad for the planet, but do you know exactly why? Here’s a hint: it’s not just about biodegradability. Styrofoam has become such an accepted everyday product that people often don’t understand how Styrofoam harms the environment.
Styrofoam is made from polystyrene, which is a petroleum-based plastic. Styrofoam is actually the trade name for polystyrene. It’s popular because of its light weight, good insulation properties, and advantage as a packing material for shipping without adding weight. Unfortunately, for all of Styrofoam’s good points, data has shown that Styrofoam also has harmful effects. 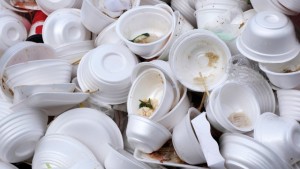 On Human Health
Let’s take a look at the elements used to make Styrofoam. Styrene is the foundational ingredient used to make polystyrene. It is broadly used in the manufacture of plastics, resins and rubber. The U.S. Environmental Protection Agency (EPA) and the International Agency for Research on Cancer have established styrene as a possible human carcinogen. Those who work in styrene product manufacturing and are regularly exposed to high levels of styrene have experienced acute health effects, including the following:

Chronic exposure to styrene leads to further complications, including effects on the nervous system. Symptoms of chronic exposure include those listed below:

Styrofoam containers are commonly used for take-out food, but chemicals can leach into it and contaminate that food, affecting human health and reproductive systems. This effect is further accentuated if food is reheated while still in the container. NEVER heat Styrofoam: always remove food to a cooking vessel for reheating.
On the Environment
Styrofoam is non-biodegradable and appears to last forever. It’s resistant to photolysis, or the breaking down of materials by photons originating from light. This, combined with the fact that Styrofoam floats, means that large amounts of polystyrene have accumulated along coastlines and waterways around the world. It is considered a main component of marine debris.
Styrofoam can be recycled, but the market for recycled Styrofoam is diminishing. Many recycling 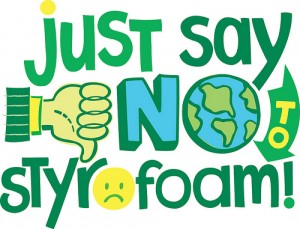 companies no longer will accept polystyrene products. Those that are recycled can be remanufactured into things like cafeteria trays or packing filler.
Along with the health risks associated with the manufacture of polystyrene, air pollution is another concern. The National Bureau of Standards Center for Fire Research has found 57 chemical byproducts released during the creation of Styrofoam. This not only pollutes the air, but also results in liquid and solid toxic waste that requires proper disposal. Another cause for concern are the brominated flame retardants that are used on Styrofoam products. Research suggests that these chemicals may have negative environmental and health effects.
Styrofoam manufacture also uses hydrofluorocarbons (HFCs), which negatively impact the ozone layer and climate change. HFCs are less detrimental to the ozone than chlorofluorocarbons (CFCs), which were used in the manufacturing of Styrofoam in the past, but it is thought that the impact of HFCs on climate change is much more serious.
Lastly, Styrofoam is made from petroleum, which is a non-sustainable resource, the production of which creates heavy pollution and accelerates climate change.
Alternatives to Styrofoam
According to the EPA, Americans trash approximately 25 billion Styrofoam cups and take-out containers every year. Compostable food service packaging is very trendy right now as an “ecologically correct” option. Compostable containers are made, using corn starch, palm fiber, peat fiber and wheat stocks; and they’re able to break down into soil-enriching compost.
Scientists have hope for developing a suitable replacement for Styrofoam. A company named Ecovative Design has created a line of products made from fungi and agricultural waste that are Styrofoam-like and aspire to be a more environmentally friendly replacement.
Already, a number of independent restaurants and food service brands worldwide, such as Dunkin’ Donuts, have shown how compostable containers can be used as a practical alternative. Several years ago, coffee retailer Tully’s began serving its popular beverages in compostable cups.
New York City; Washington, D.C.; Seattle; San Francisco and many more municipalities have announced that food service establishments, stores and manufacturers may not possess, sell, or offer for use single-service Expanded Polystyrene (EPS) foam articles or polystyrene loose fill packaging, such as “packing peanuts.”
You, too, can make eco-friendly choices to eliminate the use of Styrofoam. Send a letter to your state representative demanding a statewide ban on polystyrene products. World Centric has an excellent sample template letter you can use. Also look for products that are 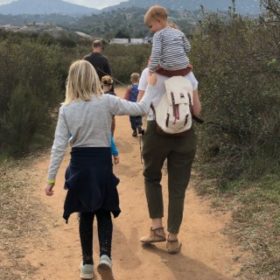 Protecting Children from Snakebites When Hiking

How To Ride Your Bike in the Winter 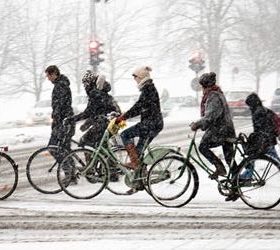 This season has given us lots of potatoes and I be

Coffee and tea are a big part of my daily routines

I pulled this card this morning and it fits so wel

No yeast? No Problem! Baking powder is the substit

Our lunches are usually from garden to plate. So w

Homeschooling week 3 and our @waldorfsandiego scho

This morning we on The Daily Mix on KAZT-TV Phoeni

Living in San Diego I really have no excuse for no

Week three of #covıd19homeschooling and to make o